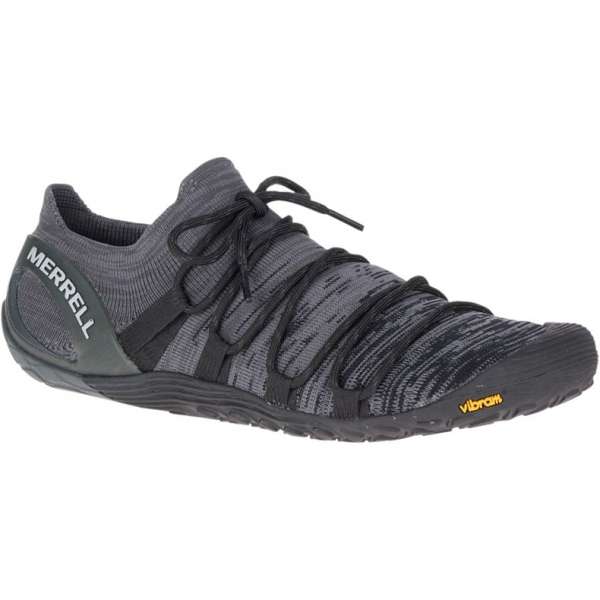 This tool is very accurate way to determine the size of its minimalist shoe, but not a guarantee, because it can not account for all possible forms of the foot. Some minimalist shoes do not correlate with their regular size. Remember that in ZaMi.es have 30 days to change the size of your shoes.

It remains a pure minimalist shoe, with a high sensitivity of the ground, light weight, high flexibility, vegan and with a new 3D knit upper for 360-degree sock-like fit.

The upper part has a new design and a new very comfortable and resistant mesh with which its durability is guaranteed. It is knit fabric with certain elastic properties, so that when we put on our shoes, they adhere to the foot as if they were a sock and do not resist the movements of the fingers.

The sole of the Merrell Vapor Glove 4 3D has a new design with triangular studs for the front of only 2 mm in height. Keep using the Vibram TC5 + compound that covers the entire sole. The sole is completely flat and only draws a small contour in the area of ​​the arch to improve the fit of the shoe to the foot. This contour is similar to what we can see in other Merrell Barefoot shoes, but much less pronounced.

Regarding the fit, the Merrell Vapor Glove 4 3D size is the same as the 3nd version. For more information we recommend reading How to choose the right shoe size and watch the video.

In terms of minimalist features nothing has changed, although they have the new Merrell Barefoot 2 last whose construction improves proprioception and stability in a wide variety of movements.

The Merrell Vapor Glove 4 retains the drop 0 and ample space for the movement of the fingers, and has no lateral reinforcements or system that tries to correct the tread.

They are flat, very flexible and with a very low weight, 196 grams for the size 42. The thickness of the sole is the same as in the previous version, 6.5 mm, so that the foot can quickly capture the irregularities of the ground and react according to it.

The Merrell Vapor Glove 4 3D can be used to run on asphalt or compact roads, all of which have very strong feet and a good running technique.

They are also recommended for those who are starting in the search for a correct motor pattern or injured people who want to change to a less damaging stroke technique, such as a shoe to gradually strengthen the muscles of the leg, while improving in proprioception and in the career technique.

As daily or casual shoes, as invisible training to improve the movement of the foot.

30 other products in the same category:

Top
has been added to compare.
has been removed from compare.
Continue shopping Compare